Medicinal Plants of the Amazon

The Ese Eja are known as one of the most botanically knowledgeable tribes of the Amazon. In one study alone, anthropologist Miguel N. Alexiades identified over 200 medicinal plants known to the Ese Eja people. This inventory included a total of 70 flowering plant families, and 155 genera. While extremely impressive, this represents a mere fraction of Ese Eja plant knowledge.

One reason for the impressive number of plant species included in the Ese Eja repertoire is the ecologically diverse area they inhabit. Their ancestral home is positioned between the Andes mountain range and the tropical forests of Bolivia and Peru: one of the most biologically diverse areas in the world. This remote location permits access to a truly unique diversity of plants, birds and animals.

Some of the plants mentioned below are used in conjunction with ayahuasca diets and some plants are prescribed by our healers to address specific ailments. Some are used for floral baths and some are used to ward off mosquitoes. All our guests have the unique opportunity to learn more about these plants on jungle walks accompanied by a local guide. All of them are found on our property, or in the Acquicuana Reserve.

Medicinal and Ritual Plants of the Ese Eja

[services1 image=”http://pisatahua.com/wp-content/uploads/2016/03/Ayahuasca-Vine-Yage-Jono.jpg” heading=”Ese Eja: Ayahuasca or Jono Pase” color=”light” animate=”fadeOutDownBig”]Scientific Name: Banisteriopsis caapi
Use and Preparation: The stem bark is boiled with chacruna and the tea is taken orally in healing rituals.[/services1]

Ese Eja: Chiricsanango
Scientific Name: Brunfelsia grandiflora
Use and Preparation: To treat colds the root is boiled in water and the infusion is taken orally.

Ese Eja: Paicco
Scientific Name: Chenopodium ambrosioides L.
Use and Preparation: To treat external mycosis, the leaves are rubbed on the body.

Ese Eja: Hongo
Scientific Name: Clavariadelphus sp.
Use and Preparation: Internal water of this mushroom is placed in the ear to treat earaches.

Ese Eja: Copaiba
Scientific Name: Copaifera reticulata
Use and Preparation: To treat ulcers and other digestive diseases, the oil is obtained from the stem, and taken orally.

Ese Eja: Sacha jargón
Scientific Name: Dracontium sp.
Use and Preparation: To treat snake wounds, the whole plant is boiled and the macerate is used externally.

Ese Eja: Catawa
Scientific Name: Hura crepitans L.
Use and Preparation: The latex is taken orally as a purgative.

Ese Eja: Huanarpo
Scientific Name: Jatropha macrantha Muell–Arg.
Use and Preparation: The root is ground and boiled. The infusion is taken orally as a depurative.

Ese Eja: Mucura
Scientific Name: Petiveria alliacea L.
Use and Preparation: The leaves are taken orally as an infusion to treat colds.

Ese Eja: Matico
Scientific Name: Piper angustifolium R.
Use and Preparation: The leaves are boiled and the infusion is taken orally to treat different diseases.

Ese Eja: Hoja Santamaría
Scientific Name: Pothomorphe peltata
Use and Preparation: To treat ulcers. The leaves are ground, cooked in water and used in external washes.

Ese Eja: Guayaba
Scientific Name: Psidium guajava L.
Use and Preparation: The leaves and roots are boiled in water and taken to treat diarrhea.

Ese Eja: Caucho masham
Scientific Name: Sapium marmieri Huber
Use and Preparation: The latex is mixed with water and taken orally as a purgative.

Oje is one of the most important medicinal plants used by the Ese Eje and other indigenous communities throughout the Amazon. A member of the fig family, it produces a latex-like resin that’s an effective treatment against intestinal parasites. It can also be used as an aphrodisiac, a remedy for anaemia, and as a memory enhancer.

Oje is often prescribed by our healers to begin the cleansing process. For many guests this will be the first plant to diet. Oje helps individuals obtain more profound insights by cleansing the body physically and spiritually; thereby allowing ayahuasca to work deeper. In Western medicine its recommended in the treatment of ancylostomiasis and jaundice.

Tobacco is perhaps the most important healing plant in the Americas. Its regarded as a master teacher throughout the continent. Mapacho is used by the Ese Eja to clean physical spaces as well as the energy fields of individuals seeking balance and realignment. During ayahuasca ceremonies, healers blow smoke over participants to clean and protect them. Mapacho can also be smoked by participants to increase the intensity and clarity of the visions. Ayahuasca and mapacho have a highly synergistic relationship.

Mapacho is pure tobacco leaf, with no additional chemicals or processing. Recreational smoking of commercial cigarettes is not allowed in our ceremonies, or in common indoor spaces.

Ajo Sacha is an extremely important shrub to hunters and shamans of the Amazon. Although not actually part of the garlic family, its leaves and bark resemble the smell and taste of garlic. Traditionally, ajo sacha was employed by hunters to mask their human scent, while amplifying their senses and focus. Bugs are also less attracted to those dieting this plant.

Ajo Sacha is a pain reliever with anti-inflammatory properties used to treat arthritis, rheumatism, pains, colds, inflammation and digestive problems. It’s also used to help purify the blood and get rid of toxins. In addition to amplifying the senses, it can also increase the vividness of dreams.

Our healers often prescribe ajo sacha to ward off negative energy, to help people make transitions, to see beyond conventional reality, and to help open up the shamanic path.

Chirissanango is attractive Amazonian plant with white and purple flowers. It’s considered a cold plant, used to treat arthritis, hot flashes, fevers and inflammation. When ingested it heats up the body and creates a tingly sensation in the extremities, lips, fingertips and toes. The word “chiric” means “itchy” in reference to this physical effect.

Chiricsanango is an advanced plant to diet with and requires total commitment and discipline. It has strong healing and protective attributes. Healers often prescribe this plant to ‘warm-up’ a cold heart, or ‘cool-down’ a heart enraged with anger. It helps people love and connect with others, as well as themselves. It helps with emotional healing and mental clarity.

Mocura is taken orally, or used in floral baths, to cleanse and help propel individuals stuck in a poor mental state. Mocura can help people who feel they aren’t living life to the fullest and lack the initiative or direction to make the necessary life changes.

Mocura is similar to the plant ajo sacha in effect and both have a strong garlic odor. Its medicinal uses include treatment for bronchitis, asthma, and cholesterol reduction. Our healers often prescribe mocura to protect again malevolent forces such as witchcraft and envy. It’s also effective in aiding weight-loss.

Pinon colorado’s immediate physical effects are negligible; however, it’s a very powerful and effective medicinal plant. It’s generally prescribed by healers to assist individuals at a subconscious level, especially in their dream-states. It’s frequently given to dieters suffering from bad luck, or those infected with negative energies.

Ilex guayusa is a species of tree of the holly genus, native to the Amazon Rainforest. In many parts of the Amazon, the leaves of the guayusa tree are boiled into a tea for their simulative effects. Guayusca tea is extremely effective at treating excessive acidity and other problems of the stomach.

Its effects are somewhat paradoxical in that it is both relaxing and energizing at the same time. Guayusca is used by shamans to illicit lucid dreams and by hunters to maintain mental awareness even when sleeping. When dieting with this plant, the boundaries between sleeping and dreaming become more fluid. Life becomes more colorful and vibrant. Shamans often recommend dieting this plant for individuals suffering from minor bouts of depression.

The name “chanca piedra” means “stone breaker” in Spanish because of its effectiveness in eliminating gallstones and kidney stones. It effectively softens both kidney stones and gallstones for easy passage out of the body. It is also renowned for its diuretic qualities and has been shown effective at helping relieve edema and urine retention. The plant is employed for numerous other conditions by the indigenous peoples, including diabetes, malaria, dysentery, fever, flu, tumors, jaundice, vaginitis, and dyspepsia.  Chanca Piedra is frequently prescribed to guests with kidney and or liver problems; however, its rarely dieted.

At Libelula we use the beautiful flowers of the rosa sisa in a multitude of ways. While, occasionally prescribed by our healers to treat digestive problems, rosa sisa is most frequently used at our center for its topical anti-fungal and antimicrobial properties. Its extremely effective at healing sores, ulcers, eczema, sore eyes, and rheumatism.

Rosa Sisa is also considered a potent guard against negative energies. We often plant it at the entrance to our cabins and main moloca for this reason. Additionally, we frequently prepare floral baths with rosa sisa to cleanse and protect our guests.

As infusion of rosa sisa is used to wash floors and as a non-toxic bug spray. Mosquitoes don’t like rosa sisa and we don’t particularly care for mosquitoes. Our guests will see rosa sisa cultivated throughout the property.

Uña de Gato is a large vine that gets its name from hook-like thorns that grow along the vine that resemble the claws of a cat. It is one of the most frequently used medicines in the Amazon basin. The inner bark has been used for millennia to treat numerous maladies including inflammations, colds, viral infections, arthritis and tumors.

Its most famous quality is its powerful ability to boost the body’s immune system and help induce self-healing. Its not so much that una de gato heals; rather it helps create the conditions in the body for its natural defense mechanisms to function at a heightened level. Our healers prescribe una de gato frequently as many guest arrive with impaired immune function. This can create a range of spiritual issues as well and una de gato is extremely effective in treating spiritual imbalance and depression.

Uchu Sanango is a tropical tree in the Apocynaceae family thats endemic to the Amazon Basin. The root-bark is macerated and taken as a tonic to treat numerous health conditions. Traditional communities have used it as a fever reducer, a diuretic and as a calmative.

Uchu Sanango is a powerful spirit that can aid in immense healing and spiritual guidance. Healers often prescribe Uchu to guests who require a change in their destructive behavior patterns. It helps release old patterns of behavior and connect with our heart-center. Uchu Sanango is an advanced dietary plant that can help facilitate powerful transformation. 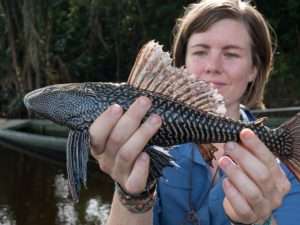